#GETTOTHESHEA on Friday, November 11th for a full night of Jeffrey Gaines at the Shea Theater in Turners Falls MA.

Accessibility Notice: Our theater and first-floor gender-neutral restroom are wheelchair accessible. There will be alcohol on-site for this event.

ABOUT JEFFREY GAINES
Jeffrey Gaines has been heralded for his soul-searching lyrics and his powerful live performances. With only his voice and a guitar for accompaniment, Gaines has earned a reputation as a captivating performer, entertaining his audiences worldwide.

Throughout his three-decade recording career, Gaines has maintained an impressive standard for soul-searching, introspective lyrics and catchy, uplifting melodies. Since bursting on the scene with his self-titled 1992 debut album, the charismatic singer-songwriter-guitarist has built a beloved body of recordings that’s won him a large and deeply devoted international fan base. He has sold out theaters and clubs throughout North America and Europe, and has earned high respect from his peers, Gaines was featured as Special Guest on tours with Tom Petty & The Heartbreakers, Tracy Chapman, Stevie Nicks and Sheryl Crow, among many others.

Gaines has been pursuing musical transcendence for much of his life. Raised in Harrisburg, Pennsylvania, by soul-music-loving parents, he began his musical life playing guitar in local cover combos, before his songwriting muse became too insistent to ignore. He soon landed his first record deal shortly after graduating from high school, and in 1992 released his widely acclaimed debut album Jeffrey Gaines. The eponymous disc won massive amounts of critical and audience acclaim, spawning the hit “Hero in Me.” Somewhat Slightly Dazed (1994) and Galore (1998) further expanded his audience.

In 2001, Gaines’ release Always Be yielded a surprise hit in his deeply felt interpretation of Peter Gabriel’s “In Your Eyes”; 2003’s Toward the Sun attracted even more critical accolades, with Mojo praising the “soul-folkie’s sexy growl” and The Boston Globe declaring that “Gaines’ soulful, wounded vocals make a case for his being one of pop’s finest singers.” Toward the Sun was followed by a pair of live albums, the 2004 CD/DVD Jeffrey Gaines Live and 2012’s Live in Europe, which reflected the deep and abiding rapport that Gaines has with his fans. In 2018, Gaines released his eighth studio album, Alright. The album was recorded in Los Angeles with Chris Price, Val McCallum and Elvis Costello’s Imposters, Pete Thomas and Davey Faragher.

“The biggest pleasure I derive from this is playing live,” Gaines notes. “There’s nothing more satisfying for me than a good live gig. I’m in control, but the audience can take it to a place that’s higher than I can imagine. When I show up for a live gig, I don’t need much, there’s no rider. It’s just, turn it on, let the audience in, and we’ll do the rest. It’s the best job anyone could ever have.”

With more than a quarter-century of recording and performing under his belt, Jeffrey Gaines is enjoying life and music more than ever. “Nowadays, I know what the job is about so there’s nothing to stress about," he says. “I know that there’s people out there who want it, so I have the opportunity to extend their experience. I guess I could lay my albums all out and see that they tell a story, but personally I prefer to keep looking forward.”

Erin Harpe Country Blues Duo (or “CBD”) has been called “today’s country blues at its very best” by Living Blues Magazine, who crowned Erin “one of the finest fingerpicking acoustic blues singers in the land”! Quickly becoming considered one of the premier fingerstyle blues guitarists today – male or female – Erin has earned a reputation as a captivating performer and passionate purveyor of the vintage country blues and roots music she was brought up on. The award-winning duo features Erin on acoustic guitars, vocals, kazoo & foot percussion, and husband Jim Countryman on ukulele bass and backing vocals. Their new album, MEET ME IN THE MIDDLE, was named “2021 Album of the Year” by the New England Music Awards! 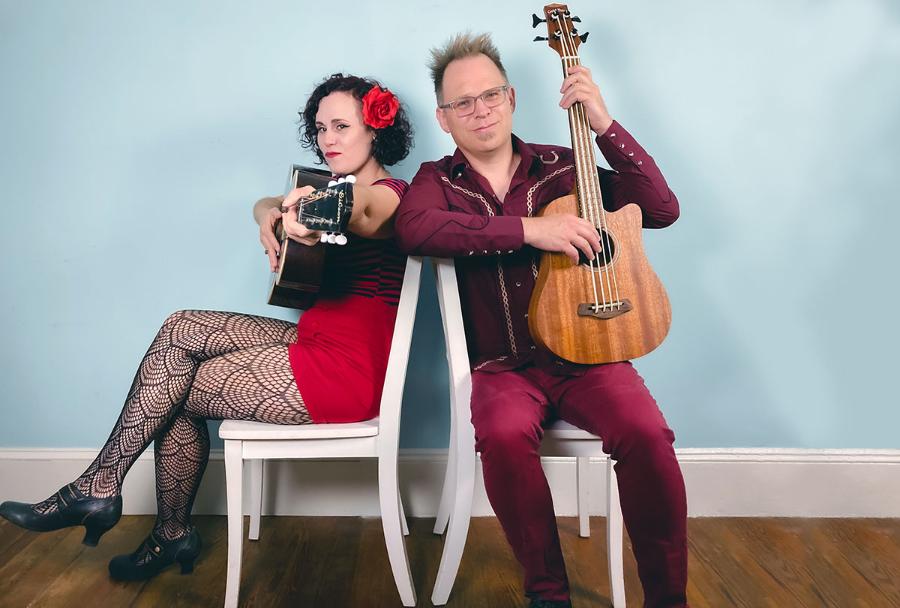