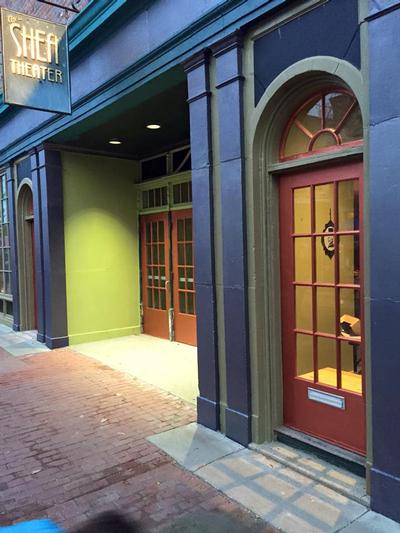 Imagine pulling off Route 2, crossing a Deco bridge over a dramatic sweep of river, with cascading falls and an industrial canal, and entering a charming village of distinctive late 19th century brick architecture. Imagine the next thing you notice about the town is the marquee of a theatre just up the street...

The first time I pulled into Turners Falls 12 years ago, I had no idea what to expect. We came to look at a house for sale and we bought it, largely because it was cheap and because of the hot tub on the porch. I paid no mind to the tenor of the town. But a few months later, we noticed some art studios hosting tours and a brand new natural history center. Some historic buildings were being fixed up. Next, a leftover laundry fashion show at a laundromat, with washing machines as a catwalk. Then a partnership of the town and many of the Turners Falls stakeholders and creative people forming into RiverCulture, working to highlight and promote the natural and cultural assets of Turners Falls. In comes a Block Party. In comes The Voo. And now, our foolishly youthful home buying decision seems like we knew this place was poised to be an artistic hotspot all along.

If I had pulled off Route 2 into Turners over a decade ago, and that little theater on Avenue A had a marquee promoting that a band like Rubblebucket was going to be at The Shea that weekend, I would’ve known Turners was an interesting place right away. The success we are enjoying has been hard won and the result of many decades of wise strategic planning, which included the use of the creative economy as a tool in the downtown revitalization prong of Montague’s economic development plan. We realize the importance of inclusion of downtown and community stakeholders to the success of The Shea, in partnership with the Town’s efforts, including continuing in the positive direction RiverCulture had forged. This appears to be a natural opportunity to join forces toward a shared goal with The Shea as the cultural headquarters.

As Steve Vogel, owner of the store “Stuff” said to me “at the very least, the lights in the lobby of that theatre should be on all the time.” Or better yet, there should be a marquee.